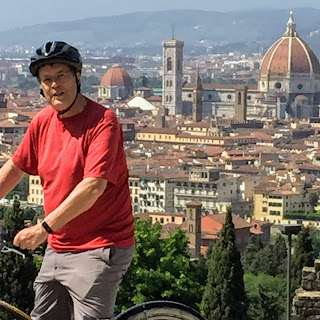 5 days in Florence gave me space to get on a bike and find somewhere to ride unblocked by thousands of tourists like ourselves! Here I am in the square of San Miniato al Monte Church above Piazzale Michelangelo across the river from the domed Cathedral on the right. Anne and I stayed at the period San Giovanni Hotel next to the Cathedral. I’m old enough to remember the florin (10p) first made in 13th Florence cradle of the Renaissance. They put truth-telling city patron John the Baptist on the coin as guarantee of the metal. Hence the saying: ‘Saint John doesn’t like cheating’. Florence’s most famous Christmas Card image is Fra Angelico’s Mary receiving Gabriel outdoors. Gothic images of this scene had the Madonna indoors on a throne, flat, static and unlifelike. Here - in Florence - is the Renaissance, with new spatial awareness in painting. The realism of this Annunciation in the Convent of San Marco is reinforced by its being secured at the top of the stairs to the monks’ cel
Post a comment
Read more

Canon John Twisleton
I'm a Sussex based priest, ideas and people person, author and broadcaster. My interests include helping people find peace and touch base with mainstream Christian believing. I have published research about the historic Twisleton family and have friends in Guyana, South America where I used to serve as Theological College Principal and am a Canon of the Cathedral.